“Ok boomer”: A Guide for Boomers

“Ok boomer”: A Guide for Boomers

You may have heard the phrase “OK boomer” (or #okboomer) being thrown around on social media or the news recently. If you are a Boomer yourself, this may have piqued your attention and perhaps left you a little puzzled too. Not to worry – below is a quick explanation on the whole situation that has evolved into a popular “meme” (and merchandising opportunity), plus our take on the subject.

First off: WHAT THE HECK IS A MEME?

There’s an Oxford Dictionary definition for that!

Meme: “… a humorous image, video, piece of text, etc., that is copied (often with slight variations) and spread rapidly by Internet users.”

Now that we’ve defined a meme, we can move on to exploring the specific one at hand: OK boomer. 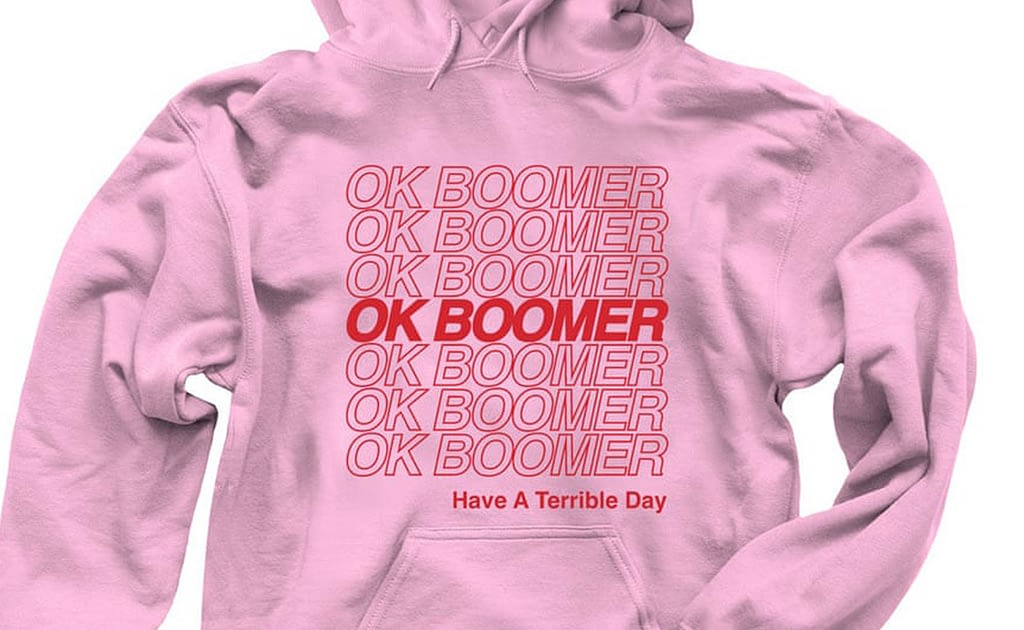 A dismissive and intentionally irritating response to the criticism by older generations (of younger ones) that has turned into a rallying cry for members of the Gen Z (and Millennial) demographic. Here’s an example of how it can play out:

Boomer: Stop looking at your phone so much and actually read a book.

Boomer: I mean it. You don’t know what hard work means and you are always so lazy.

Boomer: I am talking to you and you are not listening! You’ll never get a job and make money with that attitude and level of disrespect.

Get it? The sharp, dismissive “OK” directed at the “Boomer” denotes a lack of respect and disinterest in the opinion of the older generation.

Where Did It Start?

The meme was created and rose to popularity on social media, specifically on the video-sharing app, Tik Tok.

Gen Z kids who feel that the older generation thinks of themselves as superior, and in turn projects unfair and unrealistic standards onto them.

Why Does It Matter?

Members of Gen Z feel that their life is unfair, and that Baby Boomers have ruined the economy, the environment, and the socio-political state of the world. In a nutshell: they fundamentally disagree with how Boomers live their lives, and believe that they have effectively stolen the future of younger generations. This isn’t exactly a new sentiment – it just seems to have reached its modern boiling point with “OK boomer”, following years of tension building between Baby Boomers and younger generations. It is actually quite a natural expression of the generational gap that exists, similarly experienced (once upon a time) between today’s Boomers and their parents and grandparents generations!

The takeaway? There’s no denying that generational differences exist – as a millennial myself, I’ve definitely felt that way before. This comes from different learned experiences, like historical events, pop culture, and technological advancements – but with that in mind, reminding ourselves that every generation feels that way (in some capacity) about their elder counterparts may help soothe this overwhelming sense of hostility and feeling of “us vs. them”. Instead of pointing out our differences and dismissing one another, maybe we should focus on opening up the dialogue and exchanging experiences instead. Perhaps we all have something to offer one another.

What do you think?

Top 10 Holiday Gifts for the Active Agers in Your Life

The Evolution of Social Media

The (Not-Surprising) Rise of Pickleball

Active Agers’ Inclusion in Ads Should Be More Fashionable